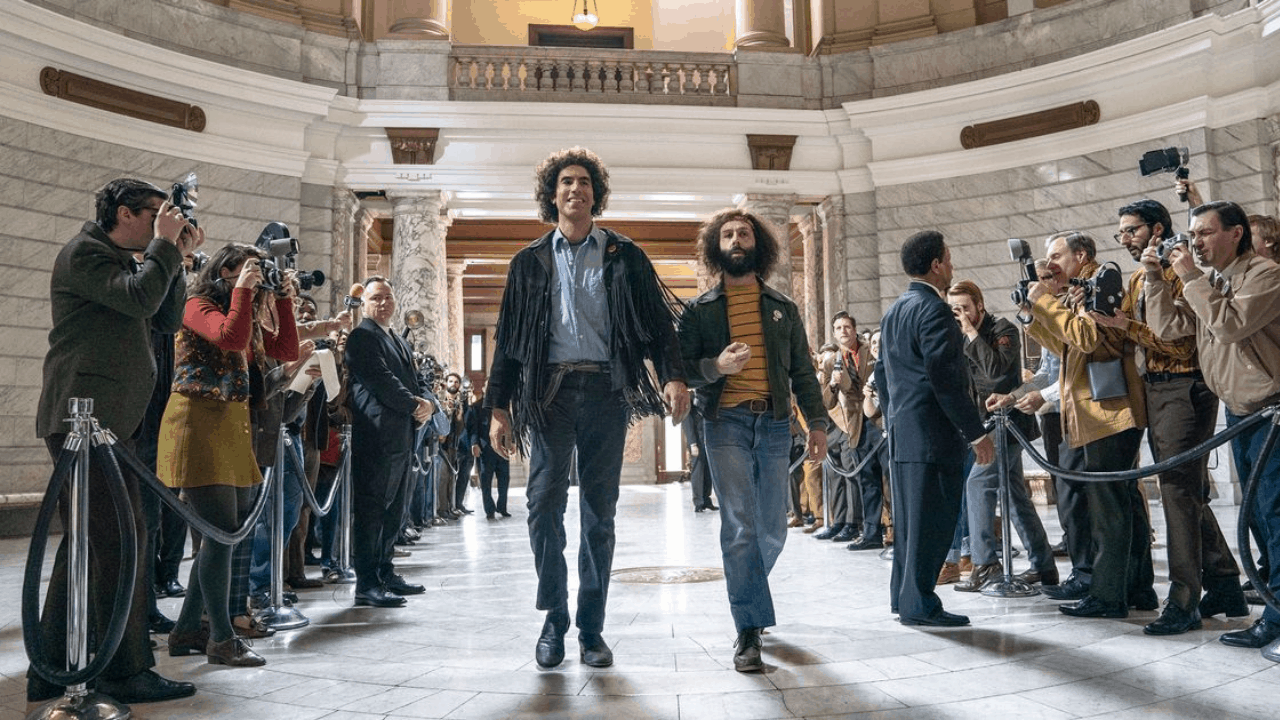 Home Reviews The Trial of the Chicago 7 review: A relevant, gripping courtroom drama

The world is in disarray. There are riots breaking out. The police and the common people are clashing on the street for what feels like the soul of the country. This is not a description of the political landscape in 2020, but of the setting of The Trial of the Chicago 7, Aaron Sorkin’s latest directorial venture.

The Trial of the Chicago 7 revolves around an infamous trial of 1968 where seven defendants were charged by the federal government after a peaceful protest in Chicago turned violent.

Things go wrong during the protests leading to tumultuous riots. These six, along with John Froines (Danny Flaherty) and Lee Weiner (Noah Robbins), face an uphill courtroom battle with the odds stacked against them.

The Trial of the Chicago 7 has one of the best ensemble casts of 2020. The whole cast is supremely talented and each and every actor delivers their best with what they are given.

Sacha Baron Cohen, as Abbie Hoffman, stands out in this spectacular cast. He is best known for outrageous cult classic comedies like Borat (2006), Bruno (2009), The Dictator (2012) etc. He channels that rude yet funny charm in his dramatic role here. He has the wittiest and the most powerful dialogues in the film. Hoffman is rebellious, transgressive and inspiring all at once. Cohen plays the part to perfection.

Another standout is Eddie Redmayne as Tom Hayden, who is, in general, seen as the leader of the protestors. He is deeply conflicted. He wants a revolution but in the most idealistic way possible. As the story unfolds his inner conflict between his intentions and actions is portrayed wonderfully by Redmayne. He is easily the most nuanced character is the whole film.

Yahya Abdul-Mateen II plays the part of Bobby Seal, the leader of the Black Panthers. He is restrained yet loud and passionate. Mateen uses the role to show his vast range of emotions.

John Caroll Lynch, as David Dellinger, does not have as big a role as others but he is given a few moments to shine and he absolutely nails them.

Michael Keaton also makes a brief appearance in the film as the former US Attorney General, Ramsey Clark, and steals the show within three minutes.

Mark Rylance is great as William Kustner, the head defence attorney of the Chicago 7. He is a righteous lawyer and his performance works wonderfully when juxtaposed with the partial and biased Judge Julius Hoffman played by the excellent Frank Langella.

The performances in The Trial of the Chicago 7 could only be so brilliant because of the ingenious writing and directing by Aaron Sorkin. Sorkin has made marked improvement as a director since his directorial debut in Molly’s Game (2017).

This film takes him back to his forte, courtroom dramas and idealistic politics. Though The Trial of the Chicago 7 is definitely less flashy and naive than both A Few Good Men(1992) and Westwing (1992-2006), it has the trademark wit we have come to expect from Sorkin.

Even though this court case is in The Trial of the Chicago 7 nearly half a century old, Sorkin manages to keep it fresh and engaging throughout. The non-linear storytelling makes the film very suspenseful and as a result, when we are given the payoff, it feels exhilarating and triumphant much like A Few Good Men (1992).

One of Sorkin’s biggest achievements here was to be able to tell this heavy story in a cohesive manner. The film has several important characters and almost every scene is pivotal. Despite having a penchant for writing long, riddle-like dialogues and the story being so complex, The Trial of the Chicago 7 is paced very well. The characters are fleshed out and their differences are highlighted from the first court scene itself, which really helps the viewers understand the film better.

The real footage that is thrown in with the shot footage grounds the film and works as a constant reminder that these were actual events and not a figment of the writer’s imagination.

Alan Baumgarten edited the film. He also edited Sorkin’s previous film, Molly’s Game (2017) and films like American Hustle (2013) and Zombieland (2009). The films he edits have very noticeable and bold editing choices. The Trial of the Chicago 7 is no exception. His editing style energizes the film and doesn’t allow the audience to rest and in fact, mobilizes them to take action.

Like most Sorkin films, except The Social Network (2010), this film is mostly black and white. The good are good, the bad are bad. Rarely are there any in-between moments.

Joseph Gordon who plays the prosecutor is criminally underutilised. He was in fact a great opportunity to develop a grey character but he is completely wasted.

Sorkin always writes smart, witty but melodramatic dialogues and stories. The Trial of the Chicago 7 is not all that different and feels a bit to too triumphant at times.

Even if you are not a fan of courtroom dramas and melodrama, The Trial of the Chicago 7 is one of the best films of 2020 so far. It has great performances, writing and quotable dialogues. The relevance is just icing on the cake. This film is a must-watch.