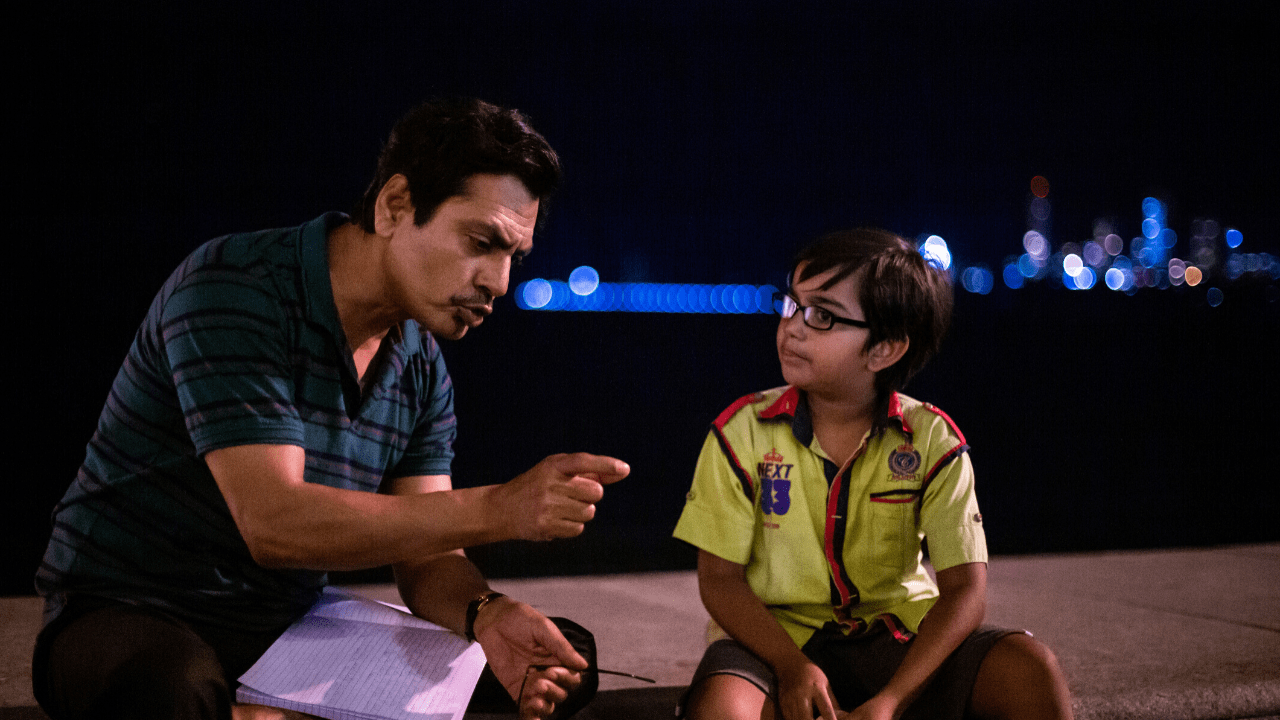 Sudhir Mishra’s latest directorial venture, ‘Serious Men‘, is a biting satire that explores issues like caste, colourism, exploitation of children and much more, all while being wickedly funny.

Based on the novel by the same name by Manu Joseph, the film follows Ayyan Mani (Nawazuddin Siddiqui). Mani is a Dalit who works as a personal assistant for an elitist brahmin scientist, Dr Arvind Acharya (Nassar) at ‘National Institute For Fundamental Research’.

Ayyan believes it takes at least four generations for a man to climb the social ladder. He is in the second generation.

After a lifetime of being belittled, disregarded and insulted by the ‘serious men’ of the world, he spins a web of lies to con the world. He begins to climb the social ladder by announcing to the world that his nine-year-old son is a genius with an IQ of 169.

Nawazuddin Siddiqui shines as the crafty yet brilliant Ayyan Mani, a man desperate for a better life. He is quick, sharp and witty. Mani can easily manipulate in and out of various situations and watching Siddiqui play this frustrated character to perfection is a treat to watch.

Nine-year-old, Aakshat Das is phenomenal as Adi Mani, the “boy-genius”. He is the real heart of the film and gives an impeccable performance at such a young age.

Nassar’s vain and arrogant Acharya is a perfect foil for Mani’s character. We see both of these sharp men be in vastly different situations where their respective fatal flaws are the cause of their undoing.

Although we didn’t see much of Shweta Basu Prasad as Anuja, a foreign university graduated young politician, she is excellent.

One of the biggest strengths of Serious Men is its script. Although it is based on a book by Manu Joseph, it was adapted for the screen by four other writers, Niren Bhatt, Abhijeet Khuman, Bhavesh Mandalia, and Nikhil Nair. It seems that sometimes too many cooks can make some especially delicious broth. The writing is astute, sagacious and to the point. There is no unnecessary clutter. It usually manages the pace and tension very well.

The film attempts to point out our hypocrisies in this day and age when we falsely believe that the caste system does not play a role in urban India anymore. Even while tackling such sensitive issues, the film is always hilarious.

The storylines of Mani and Acharya are also weaved together seamlessly. All these individual pieces are linked

A lot of the credit goes to the director Sudhir Mishra who plays the audience like a fiddle through most of the film. Through the use of motifs and symbolism, the film is made richer. Tiny details are added here and there that make this world so much more well defined.

The cinematography by Alexander Surkala isn’t usually flashy. But sometimes, Surkala shakes things up and takes things in a more experimental format where the script does so too. Fortunately, it does not feel out of place.

Unfortunately, the film isn’t able to cross the finish line with the same gusto that it began. Serious Men stumbles and stutters throughout the third act and ends in a rather convenient manner. The editing becomes choppy further and ruins the flow of the film.

Mishra uses blackouts in certain places in the film to show the passage of time that feels especially off.

Serious Men uses narration. The narration is very well written which gives us great insight into the character of Mani but it comes and goes randomly. These lines seem to have been lifted directly from the book without any cinematic translation.

In spite of having great characters, all of them could not shine, especially the women in the film. Though very well written and intriguing they had too little screen time and too little to do. The best example of this is Mani’s wife, Oja, played by Indira Tiwari.

The film tackles relevant issues while being viciously funny and delivers a few of the best performances of this year.

Serious Men is definitely a must-watch.