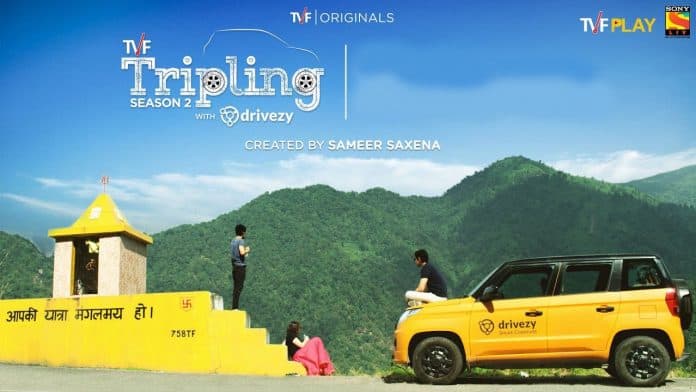 The Viral Fever is back with a bang with season 2 of their successful original series, Tripling. Just like the previous season, it is a story about siblings and a road trip full of adventures. However, the stakes are much higher than last time.

The trio of dysfunctional siblings Sumeet Vyas (Chandan Sharma), Maanvi Gagroo (Chanchal Sharma) and Amol Parashar (Chitvan Sharma) is back together under quite unfortunate circumstances which take them to and through a lot of cities in search of someone special.

Chandan is still the serious big brother, Chanchal is still the cranky middle child and Chitvan is cooler than ever. They bicker, they abuse, they laugh, they empathise and bicker some more.

The sequence of events is full of unexpected turns, quirky characters and an underlying grave political situation. There are quite a few new characters which are developed well enough to be cared about as well as some eyebrow-raising surprise cameos.

Akarsh Khurana and Sumeet Vyas have done an impressive job with the writing which is crisp and the dialogues are witty throughout the five episodes. There is a clear attempt to break a few conventions which works well.

The only flaw is how much the season 2 reuses Chitvan’s dialogues from season 1, which obviously stems from his popularity in season 1. Having said that, the character does get massive development.

The entire plot is a callback to the first season but at the same time is a different entity in itself. It is further uplifted by Nilotpal Bora and Papon’s exceptional music. TVF has yet another hit on their hands. It is a must watch and every episode is sure to make you say “It’s beautiful baba”.

Streaming now on TVF Play and Sony LIV. Watch the trailer below: