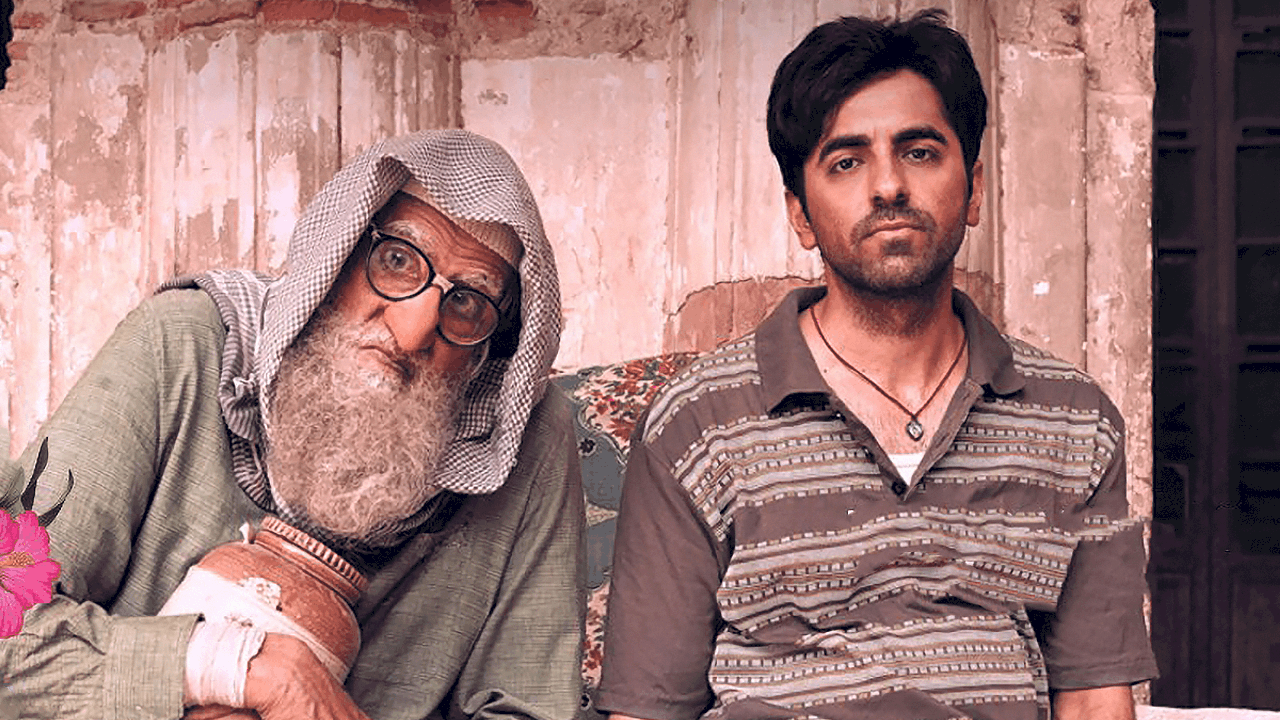 Home Reviews Gulabo Sitabo review: Aesthetically pleasing yet leaves something to be desired

A positive relationship between a landlord and a tenant is a myth. Disagreements are natural but Shoojit Sircar’s Gulabo Sitabo elevates those disputes to another level. The continuous banter between the lead characters is a highlight of this film which despite its great cast and premise, leaves something to be desired.

Set in the heart of Lucknow, Gulabo Sitabo opens by introducing us to a 78-year-old Chunnan ‘Mirza’ Nawab (Amitabh Bachchan). The cranky old man is married to Fatima Begum (Farrukh Jafar) who is 17 years elder to him. The begum is the sole owner of a withered mansion called “Fatima Mahal” with many of its rooms rented out to thankless tenants who don’t pay sufficient rent.

Mirza acts as the landlord and is responsible for taking care of the old property, often being at odds with people living there. One tenant, Baankey Rastogi (Ayushmann Khurrana), finds every reason to cross the old man the wrong way. Likewise, Mirza leaves no stone unturned to frustrate Baankey and his family.

This back and forth banter one day leads to Baankey breaking a wall out of frustration. The landlord loses his cool and asks for compensation to no avail. Knowing Mirza is hell-bent on being the sole owner of the property, Baankey aids the Archeology department to take control of it and make it a heritage site to seek revenge.

He is assured by the officer-in-charge, Gyanesh Shukla (Vijay Raaz) that after the building is sealed, the tenants would be provided with alternate accommodation. When Mirza understands the course of events, he hires a lawyer, Christopher Clark (Brijendra Kala), to attain full ownership of the mansion before the government can interfere.

The race to gain control of the century old structure begins and reaches a very unexpected conclusion which leaves everyone stunned.

Amitabh Bachchan vanishes into Mirza’s character. The cranky old man and his antics feel so authentic that it wouldn’t be an exaggeration to say he’s the best thing about Gulabo Sitabo. His speech, reactions, expressions, outbursts and body language are flawless.

Ayushmann Khurrana dons yet another common man avatar which he plays to perfection. There is nothing new as per his performance is concerned. But, the point is that he doesn’t need to bring something fresh to the table. His characters are simple and relatable which are just fun to watch.

The supporting cast is on point as well. Raaz, Kala, Jafar and Srishti Shrivastava (who plays Khurrana’s younger sister) play their parts to perfection.

Sircar succeeds in portraying the aesthetics of Lucknow. Every frame is pleasing to the eye even though the story is no glitz and glamour. Its strength lies in its simplicity and beautiful drone shots increase the appeal. The dialogues are brimming with local phrases which add to the film’s authenticity.

Gulabo Sitabo is a perfect satire and efficiently provides social commentary on a lot of things. From human attachment to the material world to exploitation of the poor and desperate by the powerful, the film has a lot of underlying messages and leaves you with a lot to ponder upon.

The subtle humor showcased as banter between Mirza and Baankey is hilarious. They fit the descriptions of the titular puppets with Gulabo, the overworked wife and Sitabo, a young mistress of the same man who never fail to undermine each other. Every interaction between them is capable of bringing a smile on your face.

Gulabo Sitabo’s uneven pace makes it hard to pay attention to the narrative. Even when you feel like investing your full focus, the frequent drag snaps you out of it. The story has no immediate motive and as you wait for something to happen, the end nears.

The film is also dragged a lot towards the end. There are certain points where it feels like you’ve reached its natural conclusion but another scene pops up just to add a little something more.

The climax, even though is unexpected, does not feel satisfying enough after sitting through almost two hours of a story that has a lot of worthy aspects but fails to ensure that the audience connects with it.

Gulabo Sitabo is not a bad film but it leaves you conflicted. You don’t really care about the characters’ situations enough, just their rivalry and the fate of the mansion. However, after the credits, you may be forced to think about important themes which the story subtly dips its feet into. Watch it for Amitabh Bachchan and Ayushmann Khurrana’s chemistry and you may be able to ignore the flaws entirely.