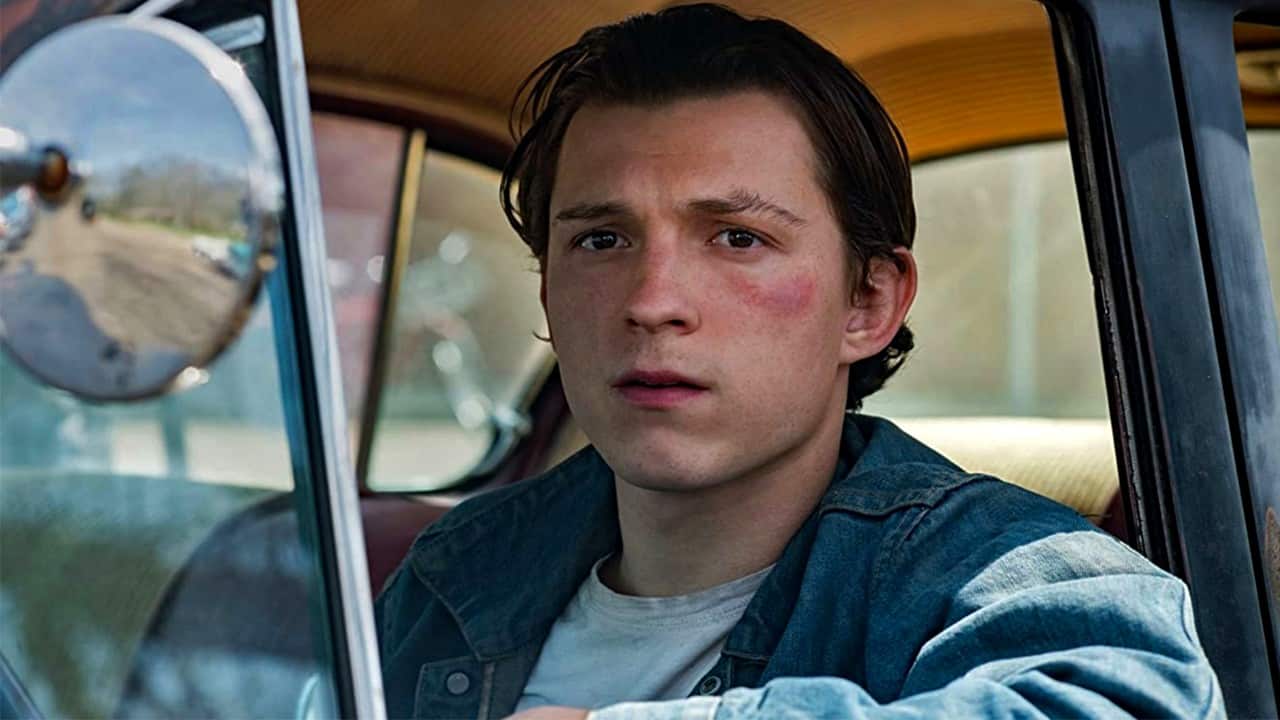 Home Reviews The Devil All The Time review: A queasy trip to the 1950s

With an ensemble cast consisting of the actors playing Spider-Man, Batman, The Winter Soldier and Pennywise, the demon clown, all in one film, it comes as no surprise that The Devil All The Time is probably the best-acted film of 2020.

Set after World War II but before the Vietnam War, The Devil All The Time follows the lives of a few conflicted individuals living in a small area in midwestern America.

Tom Holland as Arvin Russel has the gargantuan task of being the protagonist in a film with such a talented cast. Though his accent seems a bit unnatural, he gives his career’s best performance. Through The Devil All The Time,  Holland sheds the persona of Spider-Man and proves his mettle as an actor.

Bill Skarsgård is terrific as the World War II veteran, Willard Russel. Russel is a man leading a tortured existence. He comes from a religious family but war and tragedies follow him everywhere and test his faith. Skarsgård is effectively able to convey Willard Russel’s worldview, dilemmas and helplessness to the audience.

Jason Clarke’s Carl Henderson, a serial killer photographer, is easily the most unsettling character in a film that is already terribly unsettlingly. Clarke along with Riley Keough’s Sandy Henderson make a twisted Bonnie and Clyde type couple.

Lastly, Robert Pattinson as Reverend Preston Teagardin is absolutely spellbinding. Despite being a part of such an immensely talented ensemble, Pattinson sticks out above everyone else. Teagardin is a conniving, detestable, manipulative new preacher in town. Pattinson manages to make this sickening character, captivating. Even with such short screen time, he shows incredible range and proves yet again that he is absolutely ready for the mantle of Batman, in Matt Reeves’ upcoming film.

Apart from these stand out performances, each and every actor, in however small a role, is incredible.

Antonio Campos, the writer-director, somehow manages to extract excellent performances from every single actor in every frame of the film. It is clear that a lot of care and thought went into the making.

Even though the characters and settings seem familiar, the story by author Donald Ray Pollock is surprisingly unpredictable and always keeps us on our toes.

He is also the narrator of the film and again, surprisingly, the narration works in this film. The narrator adds a rich layer to it and doesn’t merely describe what is going on in the film. He seems to offer little pieces of gossip that made it a richer experience.

The cinematography by Lol Crawley is excellent. Every shot complements the emotion of that scene. The use of handheld shots during certain conversations and monologues is especially impactful.

Surprisingly a film as dark as cynical as this, The Devil All The Time has a fabulous score and uses songs effectively. It is a critical factor in establishing the 1950s aesthetic.

The film takes some time to start. It takes a lot of time setting up motivations for characters who themselves are the motivation for the actions of other, more important characters.

The thrill begins only towards the last act of the film otherwise it is a slow burn. It is a treat for those who enjoy slow, dramatic character interactions but it would be unbearable for those who don’t.

The Devil All The Time is a very dark, unsettlingly and tragic film. It is not for the faint hearted. The action is brutal, sudden and the director doesn’t shy away from showing the audience its consequences. Such gruesome violence is not everyone’s cup of tea.

The Devil All The Time will divide its viewers. One would either hate it or love it. Its slow pace and grisly violence combined with the unrelenting tragedies makes this an acquired taste. Some might find the film excessively cynical or even sadistic.

But if you enjoy films like the Coen brothers’ No Country For Old Men (2007) and Ryan Gosling’s The Place Beyond The Pines (2012), The Devil All The Time could be the next best thing. And of course, a slew of spectacular performances certainly don’t hurt.