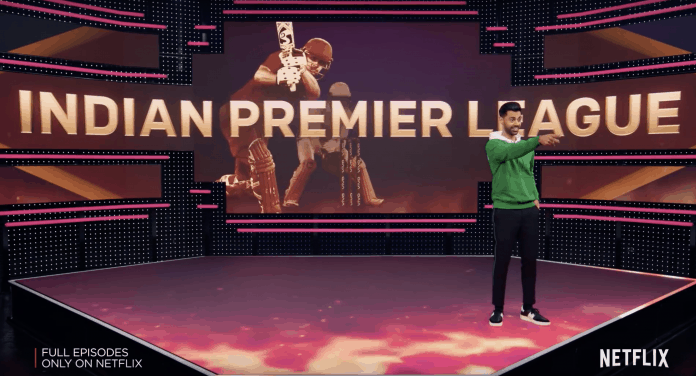 In the latest episode of Patriot Act with Hasan Minhaj, the show’s gutsy host called out corporations and big names involved in corruption of international cricket.

The episode consisted of interviews with Lalit Modi and Ayaz Memon, solid statistics, adverts and audience interaction; all in line with Minhaj’s quick and witty humour.

What stood out most in the episode was Minhaj’s hilariously bold interview with Lalit Modi (who was at the centre of the cricket scandal in India) as he casually brought out serious charges against the Chairperson of Indian Premier League (IPL).

While the episode may appear to be more relatable for an Indian crowd due to prominent references, Minhaj carefully picks out numbers and moments from history to explain the global impact of corruption in the world of cricket.

Modi’s candidness in the interview is both commendable and funny as he makes shockingly hysterical confessions about his past such as, “we were going to buy [drugs] and we got robbed on the way.”

Additionally, Minhaj managed to create some heartwarming moments as he took the audience through the tough but successful journey of Afghanistan team in the world of international cricket.

Overall, the episode works well for cricket enthusiasts and non-admirers alike as it helps to understand the functioning of important bodies that control the sport worldwide.

Likewise, the snippets of Modi’s old interviews and Minhaj’s interaction with a fan in the audience keep the viewers hooked throughout, along with the show’s signature infographics.

The episode is available both on YouTube and Netflix.

You can watch it here: