HomePatriot Act ReviewPatriot Act Volume 3 Ep 1: Minhaj is back with his witty...

Patriot Act Volume 3 Ep 1: Minhaj is back with his witty ways 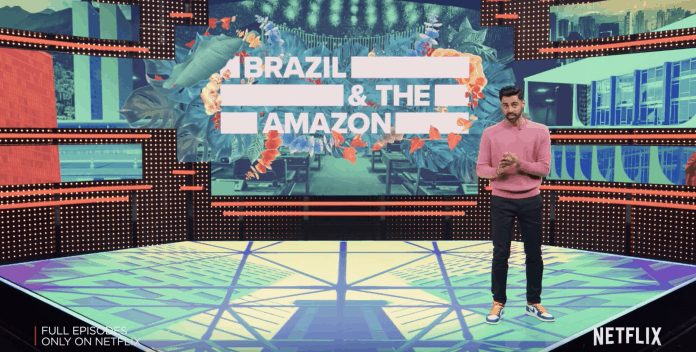 Continuing with his typical, rather quirky demeanour paired with large screens and fundamental statistics, Minhaj created a two-part episode that initially deals with corruption involved in Brazilian politics and its effects on the Amazon rainforest.

He then moves on to addressing the importance, problems and candidates of the Philippines’ midterm elections.

Minhaj uses old advertisements (including one with Kevin Spacey‘s voice) to illustrate the effect of corruption and commercialisation on forests around the world over time. However, he maintains relevancy by making a quick joke about Spacey’s recent controversies regarding sexual assault charges.

Just like episodes from the previous volumes, Minhaj ensures to provide limelight to significant people that are involved in the issue he addresses.

In this case, he interviews Sônia Guajajara– activist for indigenous people and the first indigenous woman to run for Vice President in Brazil’s history. This segment is as comically strong as it is representative of the indigenous tribes that play a key role in the topic for the episode.

He blends in comedy in the mix by seeking approval from Guajajara for his original memes as he simultaneously interviews her about the problem and its global impact.

The segment ends with Minhaj following the ‘problem-solution’ style of writing as he hilariously advertises a donation website that was created by his team for the purpose of linking users to organisations that are protecting the Amazon and its people.

The next segment called ‘Article II’ deals with other “violent autocrats” (as Minhaj calls them) that are candidates for the Filipino midterm elections. This piece of investigative journalism by Minhaj’s team is both crucial and timely as the elections were held a day after the airing of the episode.

The witty host focuses largely on current President Rudrigo Duterte and his tactics to deal with the ongoing drug problem in the country.

Minhaj and his team give the audience shocking yet unintentionally hilarious snippets from Duterte’s past interviews and press conferences which aids in further understanding of Minhaj’s arguments.

Even though he laughably describes Duterte’s key actions and speeches by making bizarre comparisons like, “He beheads people like the Looney Tunes ISIS video”, Minhaj invariably maintains the significance of voting in these elections as he presents vital investigations about the other senators involved in the game.

Overall, Patriot Act sustains its relevancy as it touches upon timely matters that could potentially have a global effect. At the same time, Minhaj continues to use his comedy intelligently to boldly call out corrupt politicians and businessmen such as Joesley and Wesley Batista that are active participants in the matter of discussion.

Likewise, the show preserves its credibility by using reliable statistics, news sources and interviews paired with colourful graphics making it both entertaining and easy to understand for a broad audience base.

You can watch an episode clip from the new episode here: