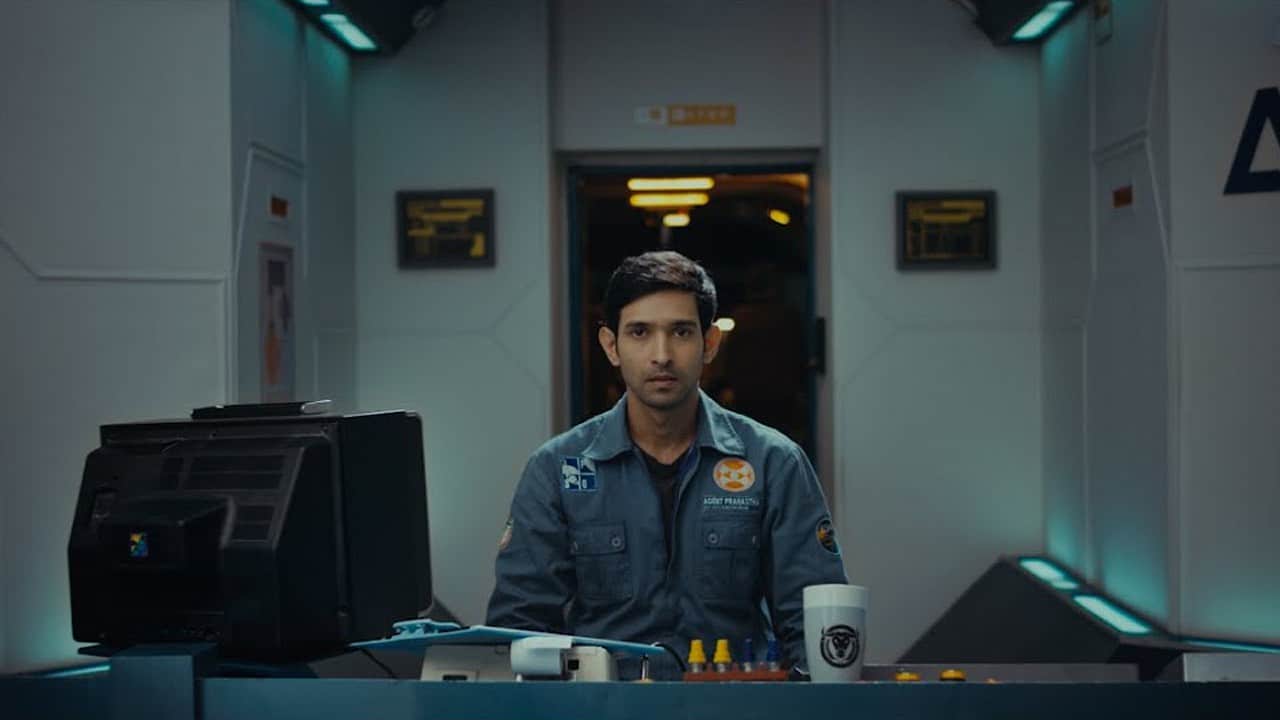 The advent of OTT platforms has changed the game in India. An industry where a handful of science fiction films were made every decade, has drastically changed within the past week. First, the adeptly made JL50 and now, five days later, the phenomenal science fiction black comedy Cargo, produced by Anurag Kashyap.

In the year 2027 – Homo Rakshasas descendent of the mythical demons have entered space-age, and have signed the “Rakshas Manushya Peace Treaty”.

Their Interplanetary Space Organisation (IPSO) has launched a series of spaceships for the reincarnation of the recently deceased humans. Pushpak 634A is one of those spaceships.

Prahastha (Vikrant Massey), a Rakshasa pilot, is one of the first six astronauts to go on this mission. He has been reincarnating the cargo i.e., humans, alone in the spaceship Pushpak 634a, for decades now.

His meticulous life is thrown on balance when a wide-eyed Rakshas, Yuvishka Shekhar (Shweta Tripathi), joins him as his assistant on the Pushpak 634A.

Vikrant Massey usually never gives the audience an opportunity to be disappointed, and Cargo is no different. Prahastha is an emotionally distant astronaut who is a stickler for the rules. His performance is initially reminiscent of Brad Pitt’s enigmatic and reclusive character from Ad Astra (2019), but he manages to differentiate himself from most astronauts we have seen in films.

Shweta Tripathi is once again phenomenal. The youthful Yuvishka is the perfect foil to the stoic Prahasta. She is smart, capable and empathetic and her methods are different from that of Prahastha. Tripathi is skillfully able to manoeuvre through a wide variety of emotions and is effortlessly endearing.

Biswapati Sarkar is intriguing, yet hilarious as Ramchandra Negi, an International Loneliness Detective. The film could have definitely used more of this character and been better for it.

Even the supporting performances by Prahastha’s seniors and the quirky deceased humans are hilarious.

One of Cargo’s biggest positives is its unique concept. It initially seems like it is treading grounds similar to Sam Rockwell’s 2009 film, Moon, but Arati Kadav, the writer-director, soon makes us realise that we are watching a film unlike any other.

She is able to effortlessly Indianise space travel and spaceships by mixing it up with Indian Mythology. There are loads of references to Indian Mythology scattered throughout the film from the naming of characters to the name of the spaceship itself. Kadav truly knocks it out of the park in her first feature film.

She creates a fascinating world with its own problems, politics, TV shows, advertisements, films, social media, and music. Such world-building has never been seen before in any Indian film. These small elements may not necessarily play a part in the film but make the world feel real and helps us connect to the characters.

Kadav has a very distinctive voice. Cargo is set in the future and yet has a vintage aesthetic. Some TV shows in the world of this film and the monitors seem to be from the 80s and 90s but everything else looks futuristic. From the songs to the production design, everything contributes to this unique feel.

The special effects and art design also do not disappoint. Everything looks authentic. Nothing seems like a gimmick.

The cinematography is, simply put, gorgeous. Just to put this feat to perspective, Cargo has been made for one-millionth of the budget for Gravity (2013).

The music is especially unusual. It fits the tone of each scene perfectly yet is never conventional. A variety of instruments are used and it also has elements of the vintage aesthetic.

A lot of the dark humour in the film comes from the editing by Paramita Ghosh. Her editing is very noticeable but it doesn’t distract one from the film.

But the biggest reason why Cargo is so good is that all the genres have been perfectly balanced. Though the film deals with death, it is done in an absolutely hilarious way. But it doesn’t just rely on being quirky, underneath all the quirks and eccentricities, the film is deeply existential. The soul of the film lies is in these philosophical questions of good, bad and the meaning of life itself. Cargo has an interesting approach to the theme of loneliness through the character of Massey’s Prahastha.

Nothing is perfect. Unfortunately, that applies to Cargo too.

The dialogue is mostly clunky. It seems that Kadav thought of all the dialogues in English and did her best to adapt them into Hindi.

Since the film is essentially a slice of life comedy-drama, it does not have a strong story to guide it but rather, it relies on its characters and its peculiar world. As a result, Cargo starts strong but loses some steam about an hour into the film but fortunately, is able to gain its footing back in towards the end of the film.

Such films rarely get made, forget widely distributed. This is a milestone in Hindi cinema. Do not go into this film expecting action or thrills and you will not be disappointed.

It is one of India’s most unique films of this century. This endearing film is a must-watch.