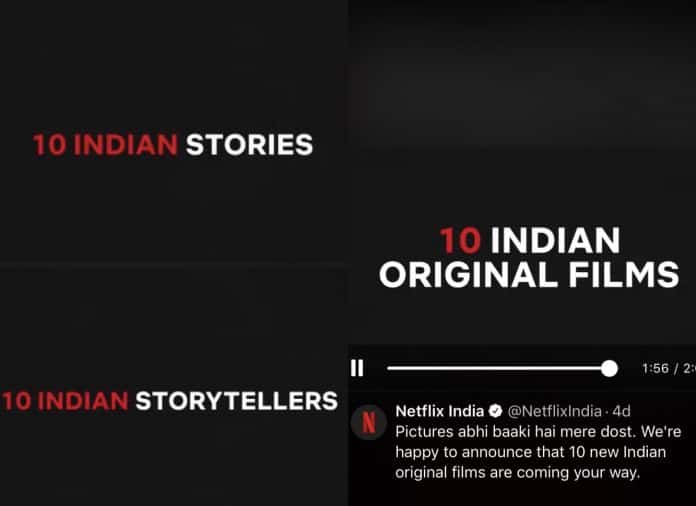 International streaming service Netflix has decided to invest more in Indian content as it announced the future addition of 10 new films with some of Bollywood’s best.

Johar’s Dharmatic Entertainment (Dharma Productions’ digital entertainment division) is set to produce Guilty directed by Ruchi Narain which follows the story of a rape committed by the most popular heartthrob in college.

Banerjee too, will be producing and directing a film called Freedom: a movie revolving around Indian families and the concept of sexual desires and ideologies within them.

At the same time, Bollywood star Shah Rukh Khan’s production house Red Chillies Entertainment will be producing Class of ’83 revolving around policeman-turned-trainer and his students directed by Atul Sabharwal.

Likewise, Red Chillies is already producing Bard of Blood with Emraan Hashmi in the lead which is slated to release in 2019.

Shirish Kunder and wife Farah Khan are also in the running to respectively direct and produce Mrs. Serial Killer: the story of a wife trying to clear her husband’s name in a murder trial.

Roy Kapoor Films will also tell the tale of two boys and their discovery of ballet as a form of overcoming challenges with Yeh Ballet. Directed by Terrie Samundra, Kaali Kuhi, a movie exploring female infanticide in Punjab is also part of this list.

Along with this, Netflix will release Maska a film about a confused millennial who wants to pursue acting till he comes across his summer romance- a sorted girl with a different perspective.

Apart from the above, Sudhir Mishra’s Serious Men, Veere Di Wedding director Shashanka Ghosh’s House Arrest, Anushka Sharma’s Bulbul, Maska along with previously announced Chopsticks, Upstarts, Cobalt Blue and Music Teacher are all in the works and slated to be released by Netflix India soon.

You can see the official announcement here: