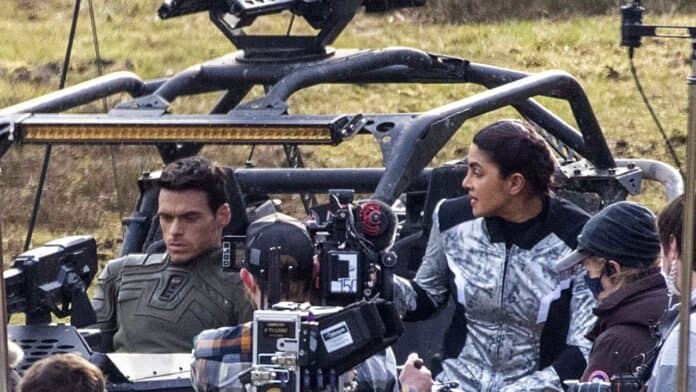 ‘Citadel’, directed by the Russo brothers, was announced by Amazon in January 2020. Described as an action-packed spy thriller, the show is a multi-series franchise with simultaneous productions in Italy, India and Mexico. The shooting of the American version started in January 2021.

The first pictures from of the two actors from ‘Citadel’ have been making rounds on the internet. The fans have become extremely excited and eager for the premiere of the show.

The snapshots have captured the ‘Baywatch’ actress in multiple sequences. She is seen in action, aiming a gun and riding a multi-terrain vehicle in some pictures.

In another image, she is seen getting rescued by the ‘Game of Thrones’ actor, coming down the ropes.

The ‘Quantico’ actress’s recent performance in Netflix’s ‘The White Tiger’ impressed the audience worldwide. Madden will also be working beside Angelina Jolie and Salma Hayek in Marvel’s ‘The Eternals’.

Other cast members to join the pair in ‘Citadel’ are Roland Moller and Ashleigh Cummins. The ‘Avengers: Endgame’ directors also announced casting Stanley Tucci on March 9, 2021.

The web series is a co-production between the AGBO banner and Midnight Radio for Amazon Studios.

Any description of the story-line and characters of the much-awaited spy thriller is still under wraps.